When we read or hear about Seldon, the character that surely comes to mind is Sheldon from the Big Bang Theory series, who I am convinced is named after Hari Seldon.

Seldon was, or rather will be, the father of psychohistory. He will be born in the year 11,988 of the Galactic Era in Helicon and will die in Trantor in 12,069 at the age of 81.

According to Seldon himself, psychohistory is the combined science of mathematics, psychology and history that can predict future events. However, it requires two fundamental pillars or axioms:

1. The population on which the behaviour is to be modeled has to be large enough (±75 billion)..
2. The population should remain ignorant of the application of psychohistorical analysis.

This is obviously the stuff of science fiction… isn’t it?

SCIENCE BUT NOT SO MUCH FICTION: THE POWER OF AUTOMATIC LEARNING.

Isaac Asimov already predicted in The Foundation, written in 1951, and through Seldon, that if you have enough data, you can predict future events, and most importantly, soften their impact if that is your aim. I think this is the first approach to Big Data, Machine Learning and Artificial Intelligence, terms and concepts that are so fashionable and now heard every day.

At present, different machine learning algorithms are used, such as regressions, in order to forecast or predict different events and then make decisions focused on achieving a goal. What Seldon did was to combine these three sciences (mathematics, psychology and history) to create psychohistory. This science will be in charge of gathering all information about human behaviour, history, the economy, crises or extraordinary events from the origin of time. Taking into account the amount of data available to Seldon and the advanced technology capable of processing it, it will be possible to not only predict the future but also to make decisions that can mitigate certain crises or act in such a way that we benefit from what a priori might seem to be an unprofitable event. Thus what appears to be science fiction is in fact not science fiction.

If we were to try to recreate this prediction using machine learning methods, it would certainly be one of unsupervised learning and we would use a regression algorithm. Let’s look at a very simple example:

Imagine that we give a value from 1 to 10 to every century, where 1 is that there has been no crisis, coexistence has been totally peaceful and the economy has not suffered any recession whilst 10, at the other end of the scale, represents political crisis, economic recession and global and large scale warlike conflicts. 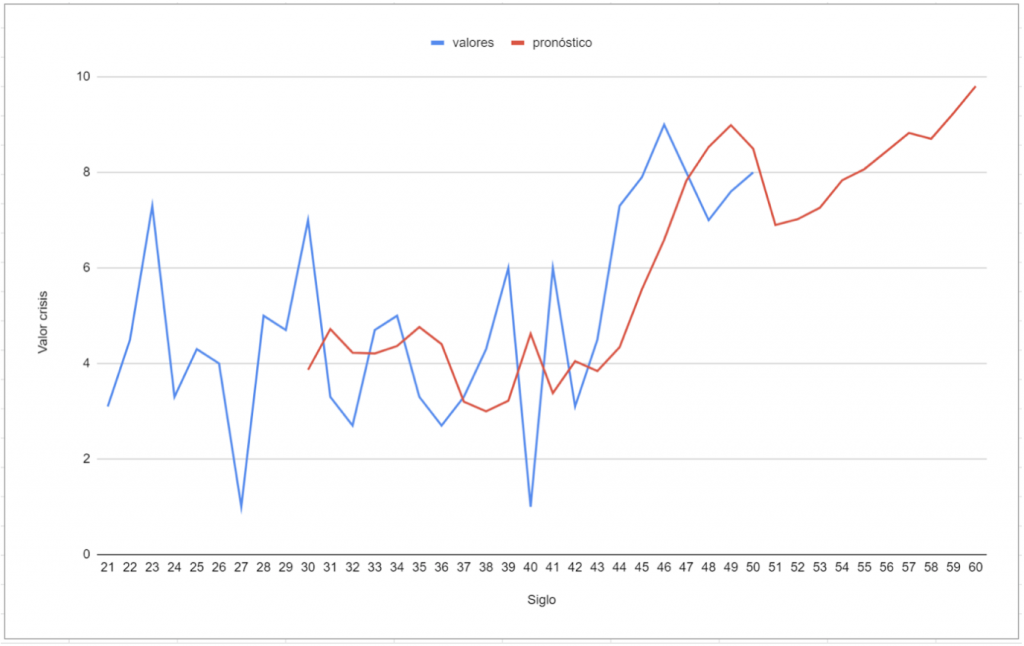 By applying a linear regression calculation (minimum squares) with the fictitious values that we have introduced, we can see that in the 60th century there is a 98% probability of suffering a global and large scale crisis. Psychohistorians at the Foundation were in charge of something similar but with an infinite number of other variables.

Today, the most powerful companies and countries in the world have the best analysts, data scientists and technologies. They have at their disposal real geniuses and unlimited resources dedicated to this topic. All events imaginable are analysed: for example, stock market crises, war conflicts, natural disasters, sports events. Anything that generates a large amount of data can be analysed. This information is key to creating strategies that can help achieve objectives. Contrary to what most people believe, the power of machine learning is not in knowing if we will sell more or less, nor if one political party or another will be elected.  The real power of machine learning is that, regardless of the prediction resulting from the analysis, we know with a high degree of probability what will happen and consequently, we can act.

Imagine a penalty shoot-out where the goalkeeper is 95% sure of where the ball will go. The power is not in knowing where the opponent will shoot the ball and saving the penalty; the interesting point is that as we know almost for certain that it will be saved, we can send all our players to wait in the opponents’ area for our goalkeeper’s shot after saving it.

This is how Donald Trump’s team made him president of the most powerful country in the world.  The team probably used time series to predict that, according to the model, Hilary Clinton would win the election and then reapplied other machine learning algorithms related to sentiment analysis on social networks to tip the vote in his favour. All of this is told in a very frivolous way, of course.

QUANTUM SUPERPOSITION AND THE OBSERVER PARADOX

In experimental physics and quantum physics, the observer paradox refers to a situation in which the observed phenomenon is influenced by the presence of the observer or researcher.

Since I am not a theoretical physicist, I am going to limit myself to Wikipedia’s explanation of this because I believe that it is very easy to understand. I encourage you to read it in full.

A quantum superposition occurs when an object simultaneously possesses two or more values of an observable quantity. It should be made clear that this only happens in subatomic or quantum particles, that are so small that a photon of light can make them collapse in one direction or another. This is where we may validate Seldon’s second rule: the population should remain ignorant of the application of psychohistorical analysis because if the observer (quantum particle) detects that it is being observed, it can vary its behaviour (collapse).

Ahead of us lies the possibility of using these tools and this knowledge correctly to improve the quality of life for everyone. In this way, we will help conserve the planet, achieve unimaginable technological discoveries and evolve as man has never done before.

Unfortunately, for now, this seems to be fiction.

Acknowledgements:
To Isaac Asimov for showing me the way;
To Nico, my partner and a crack in his spare time;
And to Schrödinger’s Cat, such as it is.