The 5Ws of Data Visualization

The 5Ws of Data Visualization

The need to use graphic resources to visualise data arises quite naturally as a way of grouping and highlighting certain aspects of information that one wants to share. From this point, a language emerges combining abstractions and concepts through visual elements to bring out the intrinsic details of the information.

With language, we learn to read and write as separate but related skills. In the same way, with visual language we learn to understand (read) and create (write) as separate but related skills. There are many books, courses and other resources that teach how to develop data visualization; but few that teach how to read and understand it. In this article, we will try to explain the present impact of visualizations, understood as artistic compositions, as well as their usefulness and benefits.

Frédérik Ruys, designed the following matrix to decide which graphic to use according to which of the 5W questions to be answered: who, what, when, where and why. 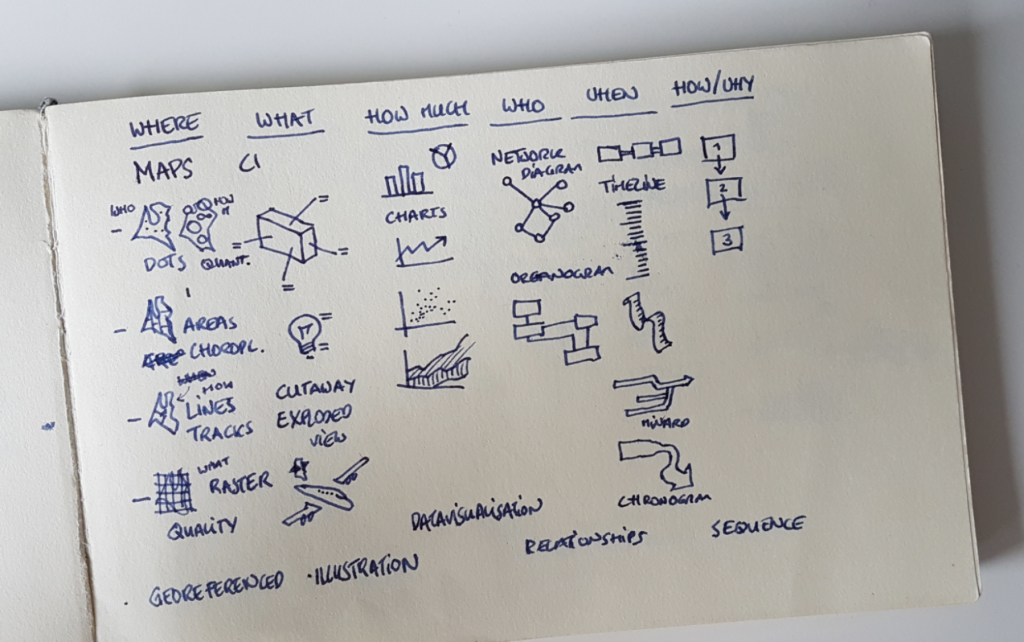 Starting from the point that “shape comes before functionality”, the best method for visualization is defined according to the type of questions you are asking your dataset. Source: Frédérik Ruys.

Afterwards we will apply this same narrative framework but using the theory of data visualization and its state-of-the-art as a reference.

What? What is data visualization?

Data visualization is the visual exploration and graphic representation of data of any size, type (structured and unstructured) or origin. Visualizations help people to see things that were not obvious before. Even when there is a large volume of data, patterns can be quickly and easily detected and this is known as exploratory visualization.

In addition, visualizations transmit information universally, making it easy to share ideas with others and encompassing what is known as explanatory visualization.

Exploratory visualization is done to familiarise oneself with the data. This can begin with a hypothesis, a question or simply by examining the data to determine whether it could be of relevant interest.

Taking into account this distinction, the visual images that may be used for exploratory and explanatory steps of the analysis process can differ, bearing in mind that when we focus on one aspect or story, in reality it is more difficult to show the others. This is one of the reasons why it is important to undertake an exploratory analysis before reaching the explanatory phase, to ensure that you are focusing on the correct objectives for your audience.

Why or What for? Why use it regularly?

Ask yourself what it is that you want to represent or visualise. It could be operational goals, revenue, inventory, productivity etc but perhaps it is something that you are not currently measuring or visualising because it simply has not occurred to anyone or because it was too difficult. Another focus could be: What is wrong with your current method of information visualization? If there is something that you do not like with the current visualization method, could an alternative be used? How could it be done correctly? – And design an alternative method to do so.

The goal of visualization is to magnify aspects of hidden information, so therefore it must always be precise and true to reality, as well as having the necessary context for us to ensure that the important points are seen and highlighted rapidly.

A well-designed visual report highlights the message behind the data and instantly inspires users to debate, decide and act. This is the true power of data visualization: moving from seeing to doing in seconds. It also gives people the opportunity to analyse and examine large sets of data that would otherwise be difficult to understand.

Who? Which roles are involved?

Professionally, various roles or job profiles are established around visualizations; the first of these is the data designer, who addresses different challenges of communication.

While the data designer’s final product must be attractive and striking, the real task is to connect intellectually with the emotions. This means that a data designer will prioritise precision and ease of use of data within an aesthetically pleasing visual context. However, attractive graphics remain a key responsibility. Data designers have not abandoned the idea of a visually attractive final product but they must also ensure that their presentation choices reinforce rather than blur or obscure the data.

A second role is that of the data scientist, a specialist who applies his experience of mathematics and statistics to create automatic learning models in order to make predictions and answer key business questions. A data scientist still needs to be able to clean, analyse and visualise data, the same as a data designer; however, a data scientist will have more depth and experience in these skills and will also be able to train and optimise automatic learning models.

The target audience is probably the most important consideration when designing visualization. Meeting or interviewing the audience is necessary in order to understand the data easily and effectively, creating an effective channel of communication quickly and comprehensively. This is the role of the reader or information consumer.

Current trends reveal that the world of data science has grown in recent years, centralising and refining different roles and job profiles. Initially a step forward in big data, advanced analysis has become key in data-based projects and is creating specialisations within the role of data scientist, areas of expertise that are all mistakenly directed to the same notion: data scientist.

When? How to visualize and analyse data in order to extract processable ideas and information?

Once you have a goal in mind for visualization, you must think about which types of analysis will help you achieve this goal. One difficulty that can slow down analysis is deciding which types of graphic to use and why. This is because the wrong choice of visual aid or simply the failure of the most common type of data visualization can confuse the viewer or lead to misinterpretation of data.

There are two major data visualization groups: visualizations (graphics, charts, maps…) and infographics. In this regard, a dashboard is usually a group of various simple visualizations.

Data visualization often shows a data set with minimal editing and its objective is to make the data more accessible than in its original form. Some data visualizations also allow the underlying data to be explored. 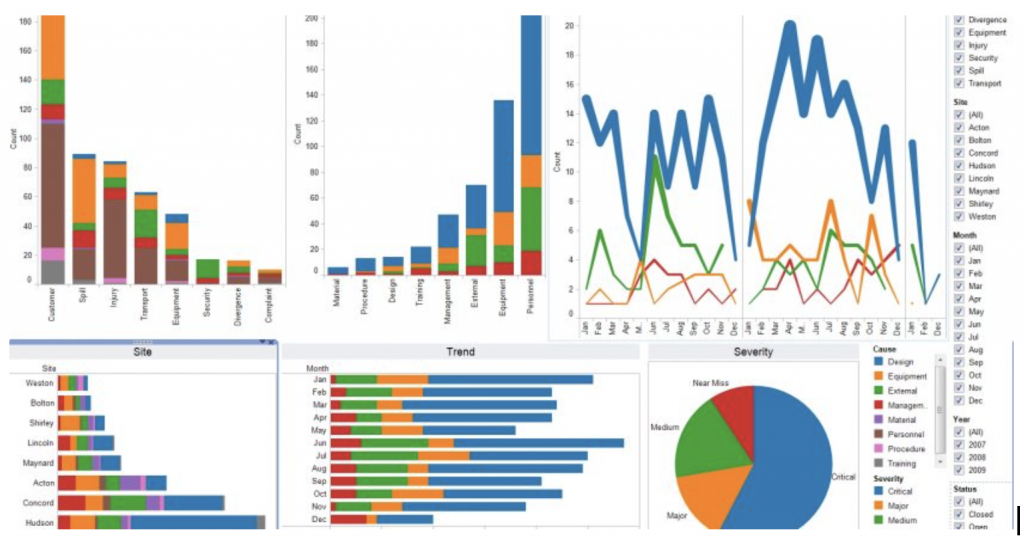 Example of data visualization in a dashboard

An infographic is a collection of visualizations around a theme. The infographic is designed to tell a particular story to a specific audience. It may include images or information and comprises a high level of design. 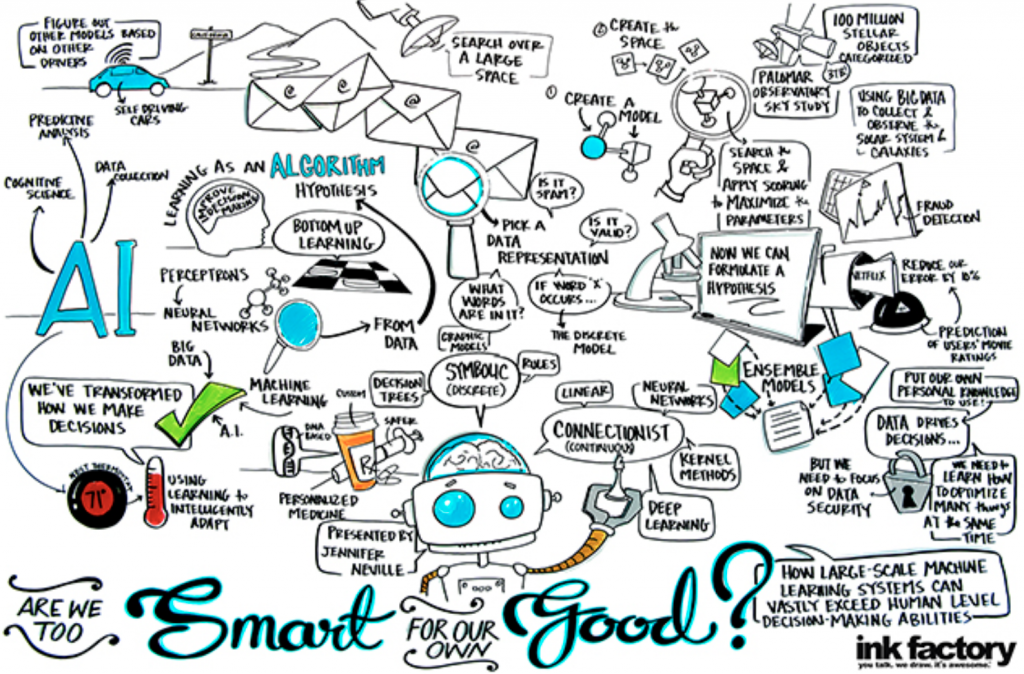 In their book ‘Designing Data Visualizations’, Noah Iliinsky and Julie Steele use the following three criteria to determine whether a graphic should be called data visualization or an infographic:

Where? Where can I create visualizations?

Now more than ever, executive directors and managers recognise that data-based decision-making is essential and that a data-oriented mentality can offer a competitive advantage.

This data omnipresence has pushed managers to equip their businesses with self-service tools that act as distribution platforms, from the open-source spectrum (D3, ECharts, RAWGraphs, etc.) to the commercial arena (Tableau, MicroStrategy, Microsoft Power BI, etc). These visualization tools allow employees to extract relevant and important information from their company’s immense collection, as well as undertake sophisticated analysis and obtain knowledge, even without sound technical training.

All these tools offer enormous advantages and enable both perspectives of data visualization to a great extent; generally they may be classified as automatic tools which bring together activities of ingestion, consultation and manipulation of data and more manual tasks aimed at the extension and design of visualization in a non-technical manner. Other decisive factors for choosing one or the other can be local, on-premise, like Saas… or its licensing system.

The effectiveness and impact of analysis depends on two types of visualization skills: the ability to create visual effects and the ability to understand images. The true value of visualization comes not from the creation of visual effects, but from understanding what you wish to transmit. Making the information understandable depends on the skills of those designing the visualization, but the value and impact comes from those who read, interpret and use this information to stimulate conversation, collaboration and innovation. It rests on the reader to approach visualizations systematically, to view them critically and look for the real significance derived from the data in order to learn to read the visual language.